This year we had the 200th birth anniversary of one of America’s greatest poets, Walt Whitman (1819–1892). The poet who sang “of himself” and of democracy, sought to balance  two apparently conflicting ideas—individual freedom and social responsibility. These two inseparable concerns have shaped modern literature. These perennial concerns are, as a matter of fact, common to philosophy, politics as well as religion.
In one of his poems (“As I Ponder’d in Silence”), Whitman says he encountered the spirit of the ancient poets who told him that great poetry is about great wars. Whitman responds by saying, he too, writes about a war; in fact, the greatest of wars, the war that goes on in the human soul. He is echoing what John Bunyan  (1628–1688) had said in his 1682 book THE HOLY WAR, the war for the soul of man. Conventionally, Whitman is seen as a Transcendentalist, but he is basically shaped by biblical conceptions of man and society.
With Dutch and English ancestry, he embodies the Protestant ethos of individualism and communitarian responsibilities. He is no anarchist, in the usual sense. He moves away from rules and statutes of the society because he looks forward to the day when the divine law will be indelibly written on the human heart and we will instinctively do what is right (Jeremiah 31:33; Hebrews 10:16). His idea of human camaraderie is straight out of Psalm 133 and reflects the New Testament idea of the church.
His admiration for Abraham Lincoln (subject of his popular poem, “O Captain! My Captain!”) affirms that democracy doesn’t mean merely the will of the majority but upholding of the principles of justice, and fighting for what is morally right. Personally, Lincoln’s individual greatness was his ability to unite a nation under the banner of justice and righteousness. That was biblical individualism that Whitman admired and promoted. 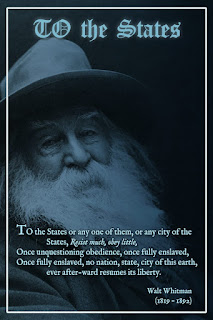 He wanted cities, states and nations to “Resist much, obey little” (“To the States”) because institutional and collective liberty is far more important than merely self-centric individual freedom. Ironically, the strength of American democracy is that people do not want to be patronised by the government. Americans don’t consider their government their master, because in their collective unconscious all Americans are subjects of one great authority.
The implication of this?
Democracy does not mean that everything goes. Whitman sings for the “freest action form’d under the laws divine”. There is no doubt in his mind that there were higher principles that we must recognize, if we want to safeguard our liberties and our democracy.
He did flirt with Deism, Romanticism, Transcendentalism, Eastern religions, etc., but 127 years after his death we know that Whitman’s fundamental orientation—in fact, the USA’s fundamental orientation—remained firmly tied to the faith of the Pilgrim Fathers. That faith not only refused to sacrifice the individual’s conscience at the altar of tradition and tyranny but also sought to create a new order for communal living based on equality, justice and brotherhood. Whitman scholars often overlook this aspect but perhaps even Whitman wasn’t aware of that invisible bond. However, without first appreciating that, it is not possible to understand American literature, American nation and American democracy—and, of course, Walt Whitman!
Posted by Ashish Alexander at 5:17 pm