Stuck in the Schindler's Lift

I am glad I am not claustrophobic. Since the day we got the lift working in our office I have often had one thought—What if the lift gets stuck in the middle? I never actually answered, or sought to answer this rather morbid flash of fancy. Today, I seem to have gotten an answer—if the lift develops a glitch, press the alarm button and the lift operator will do something.

.....There was a power breakdown as I just boarded the lift this morning. I was alone in the lift and no sooner did it reach the first floor than the lights flickered, the fan ceased to hurl the tepid air and the lift stopped. I caught myself smiling gleefully in the full-length mirror. No, I am not claustrophobic, it is confirmed. My phone was fully charged and so I could spend a day talking to the reporters from the news channels if need be. I called Jagdeep, my office mate and told him how I was stuck. We both were amused and we hung up. He didn't think necessary to come down and it didn't make sense to me to call him. It was physically impossible for him to come anyway; the lift was stuck and all of us hate stairs (Jagdeep and I especially, even though our waist sizes are beginning to become unavailable in the market). In the meantime the door of the lift slid open but instead of the passageway there was a wall in front of me. I was on the first floor and the lift is not meant to stop there so that logical opening is walled up. I didn't feel like Anarkali and I didn't bother wondering who decided this and why. I was only too happy relishing the prolonged moment of my fortitude. Then I heard some commotion overhead. Our security incharge and the lift operator were executing a plan to rescue me. With soft jerky movement the lift began to ascend. I overcame the wall and a new dawn was setting in through what seemed like a skylight in my prison cell. 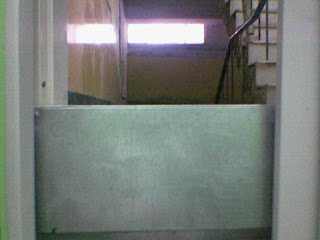 As I moved up, the passageway of the second floor became a skylight, then a window and then a big window.
.....In this picture on the right you can see the floor level of the second floor. I was thinking to climb up and go over but didn't want to do anything unless asked to. No movement without instructions. Our security guard, Shiv Shankar ji, came to check and then shouted to pull more and then ran up to, I think, do the pulling himself. The hiccupy motion of the lift continued. And the big window began to grow into a proper door, a welcoming gate to glory which awaits people who have endured much in life. I was thinking that my whole office would have come down to give me a hero's welcome but as you can see in that picture there was no one, oh! heartless world. Anyway, Shiv Shankar ji, came back. By the time the lift had moved few inches up. I was still not stepping out. Not before somebody had noticed my travails. Only Shiv Shankar ji was there, the man with Bholenath's dual eponym. He couId at 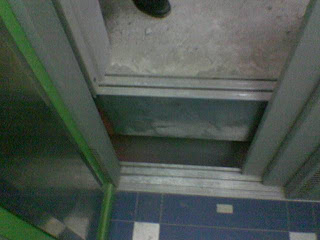 that moment burn me to ashes by his supernatural third eye—Sir why don't you come out. More than request it was an order, actually admonishment. He perhaps wanted to say—You fool what the heck are you still doing there? Who are you waiting for? For me to play on my damru so that you to start your monkey business (This should not be taken as a reference to the company I am working for, or to the work I do there). His veiled annoyance was justified because I could just step out of the lift now as easily as mounting on a single step. In the second you can see the difference in floor level of my lift and the second floor. And that foot that you see is of Bholenath's. Only one foot is visible because he is now the Natraj, getting into his most iconic posture. Come up sir—his voice thundered. And I meekly climbed up to his level. The level which is more awesome than the Olympic pedestal. And I trudged, unmindful of the fact that this little misadventure has had been a double blessing to me. One I have found the answer to what happenes when a lift gets stuck and secondly, nobody seemed to notice that I have come half-an hour late to the office.
Posted by Ashish at 10:03 pm 4 comments: