Is There a Hierarchy in Rapes? 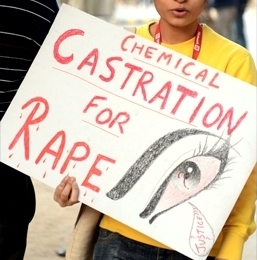 As the news of this gruesome, literally gut-wrenching, gang rape began unfolding in the national media, the middle-class, metropolitan children of post-liberalization India began to crowd at key spots in key cities giving vent to the justifiable anger a tragedy like this must evoke.
But there is another , some refer to it as Bharat, to which this all seemed a bit odd. Make no mistake. That second did feel outraged at this act of violence against a young girl. After all, it gets affected by such incidents as a matter of routine. So, the irony of it was too blatant to escape notice. Crime against women is not something new in this country. Despicable acts like rapes, gang rapes, brutalization of women, parading them naked are not unknown in our part of the world. Let us list only the most well-known ones:
Misogyny (hatred of women) is deeply ingrained in the cultural DNA of South Asia, despite its much-touted goddess-worshipping pretence. Rapes, along with other forms of sexual violence, continue unabated, even unchallenged. If we had done something about the very first rape that was ever reported from one of our dusty villages, we may not have had to lose yet another of our daughters. Or was it that the vulnerable women from the so-called weaker and backward sections (which most of us Indians are) were never owned like ’s daughters? Is it possible that these women were not worthy or valuable enough to be worried about? Was their honour expendable and their suffering well-deserved? How else can one explain the selective pangs of conscience?
With deepest sympathy for this latest victim of women-hating culture, for our young sister, we, the second , only asked a question why no such outrage in any of the earlier instances of rape and brutalization and murder.
And the first asks us in return: Is there a hierarchy in rapes?
An Indian journalist writing on an American news Web site counts various lessons this incident taught him—them. Here’s one: “We learned that it’s an exercise in futility to try and assign a hierarchy to rape as if one rape is more deserving of attention than the other. It’s a recipe for doing nothing. Let’s not question why this jolted us more than other rapes now. Let’s be thankful we are capable of being jolted.” 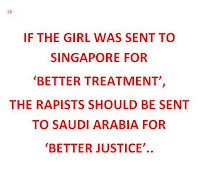 What this self-congratulatory remark assumes that those who have actually been fighting lone and largely losing battles to ensure justice to themselves or their daughters, sisters and friends do not exist; their sufferings, battles do not exist either. It is only now that something will be done. In the end, he is happy to discover that he and others like him are after all a sensitive lot. They care. Trust me, it is a consolation for us too that you are jolted. But we want to help you that you don’t slip right back into your earlier trance-like slumber induced by number of social privileges you enjoy. Try moving beyond the demand for castration and shouting “gallows”. How about working towards an egalitarian world? How about a little humility? If you are really serious, own up to your past insensitivity. How about seeing the world as it is? Recognize that there are deep and diabolic divisions in this culture you never tire of praising ad nauseam. Accept yours is the society that is built on rigid hierarchies of caste, gender and class. Admit you have graded human beings on the basis of their birth communities.
Many “noble souls” have even called for a change in the entire societal mindset without taking the trouble to hint what that might mean. But when the gentleman dreads that this jolt-worthy tale may “end in recriminations about how we care because this is a middle class girl and not a lower caste woman gathering firewood”, the second understands exactly the mindset that needs to change, which humanly speaking is impossible—though with God all things are possible.
So, be truly brave and resolute.
More than us, you must convince your own inner self that you are serious about the change. You are not faking it. And “you” here is the entire chattering class of , of which Indian media is only a subset.
You are under no obligation to listen to the second but let it be said:
Stand up and say that you are sorry for not standing up earlier.
Say that you are sorry for not speaking up earlier.
Say that you are sorry for turning a blind eye to all the earlier brutalities to which women, men and children of lesser gods were subjected to.
Say that your fabled Mother India does not play favourite daughters.
Say that each and every instance of rape and sexual violence will be pursued with this same intensity.
And say that there is indeed a hierarchy; not of rapes and other crimes, but the way our society and culture views and values human beings, both men and women.
And then you will suddenly realize that how irrelevant is this questions: Is there a hierarchy in rapes?
Posted by Ashish Alexander at 12:39 pm 3 comments:

“India has already graduated beyond Gandhi to Ambedkar…” Vishal Mangalwadi made this pronouncement in a letter he wrote to Arun Shourie about 17 years ago. Shourie had just published a book Missionaries in India: Continuities, Changes and Dilemmas (1994) in which he presented a devastating critique of the Christian missionaries whose service in India overlapped with the colonial rule. An admirer and follower of Gandhi, Arun Shourie is, like his idol, against missionaries, against conversion and against the rise of the Dalits. This letter was written in February 1995. Kanshi Ram’s BSP was already a force to reckon with in North India. Ambedkarism was swelling in appeal with five years of debates and discussions around the Mandal Commission Report. As if to counter this assertion, and reclaim the lost ground for Gandhi, Shourie wrote his next book denouncing Ambedkar, Worshipping False Gods: Ambedkar, and the Facts Which Have Been Erased in 1997. Did Shourie succeed in what he intended to do?

A few months ago, about 17 years after the above-mentioned letter reached Mr Shourie, the mainstream Indian media and the Indian middle-class woke up to the same truth, when the result for the Greatest Indian After Gandhi poll was declared. Ambedkar was heads and shoulders above Nehru and the galaxy of other popular Indian personalities. Many dared to believe if Gandhi was among the contenders he too would have been relegated to No. 2. Gandhian nationalists, within the Congress party as well as the BJP, could not stem the tide of rising popularity of the man whose only contribution to the country according to the official text books is that he was the “father of the Indian Constitution”. The emergence and rise of Ambedkar in the mainstream media and cultural life has posed a serious threat to Gandhism and the Gandhian view of social and political philosophy. Or has it really?

It is instructive to keep this context in mind while remembering Jabbar Patel’s film Dr. Babasaheb Ambedkar (2000). Any discussion of Ambedkar must turn sooner or later to Gandhi, his older contemporary and, socially and politically, his bête noir. Similarly, his representation must be contrasted with the way Gandhi is represented in the film. When Richard Attenborough made Gandhi in 1982, there was no mention of Ambedkar in the film. Gandhians could live under the illusion that Ambedkar can be relegated to oblivion. However, Ambedkar and his legacy were alive and thriving. With Ambedkar’s birth centenary approaching in 1991, a demand was begun to be made for a full-length film on Ambedkar too.

The film, released a dozen years ago, no doubt, has high production values. Technically, it is brilliant. After all, you expect that when some of the best names of Indian cinema come together to create a masterpiece. Bhanu Athaiya, Shyam Benegal, Mammootty, Ashok Mehta were all there to aid Jabbar Patel in fashioning a historically credible biopic that is also aesthetically appealing.

But what is it’s evaluation of Gandhi? To be sure, the film lampoons Gandhi, shows him to be a shrewd and obstinate man but ultimately a benevolent moral dictator, who convinces Nehru to bring Ambedkar into his first cabinet. However, mocking and lampooning Gandhi is not the most radical thing a filmmaker or, say, a creative writer can do with the mahatma. He did that to himself, for instance, in his autobiography. In any case, contrary to the popular notions, we Indians are not uncomfortable with the whims and fancies and even moral failings of our great men or even gods.

Recently, Ram Jethmalani, a member of parliament representing the Hindu nationalist party BJP, made a controversial remark that he thought Ram was a bad husband and for that he did not like him. Innocent people can be forgiven for being scandalized with this apparently anti-Hindu remark. But Ram Jethmalani was only being a good, more complete modern Hindu himself. Hinduism does allow one the freedom to be playful with its gods, to the extent of mocking them. Jethmalani will continue to serve in the party that draws its inspiration from Ram the king, Ram the warrior, Ram the brother, Ram the son, Ram the Kshatriya, though he may have a minor bone to pick with Ram the husband. This is because Hinduism does not require absolute moral purity or perfection from its gods. It is perfectly possible to be a good Ram bhakta while complaining about this or that moral failing in Ram. Similarly, it is perfectly possible to be an ardent Gandhian despite quibbling over this, that or the other aspect of Gandhi’s personality.

So Jabbar Patel can lampoon Gandhi but ultimately Ambedkar is shown to depend on Gandhi’s magnanimity to rise up the ladder. The film is a perfect example of how the forces of Brahmanism have incorporated and hierarchised, to use Louis Dumont idea, Ambedkar in the neo-Hindu pantheon of nationalist leaders.

A film that sought to underline the uniqueness of Ambedkar’s life and thoughts should have emphasized how Ambedkar’s diagnosis and cure for India’s Depressed Class’ problems differed from Gandhi’s Harijan cause.

This ultimate impact of the film became clear to me when an accidental reference to it was made in a discussion I was having with a small group of students from Bahujan backgrounds. Since all of us had seen the film a long time back, the only thing these students seemed to remember was the benevolence of Gandhi in bringing Ambedkar on board!

The film does not break the mould but only finds a place for Ambedkar in the cracks that have appeared over a period of time in the grand narrative of Indian nationalism; and thus it plugs that gap. The film falls in line with the larger nationalist design where space for Ambedkar will be made only as a compliment to Gandhi and not as his counter point.

If politics is any indication, India has graduated from Gandhi to Ambedkar. But in cultural and aesthetic spheres, there’s still some catching up to do.