200 YEARS OF "THE PRECEPTS OF JESUS": A DEBATE ON KNOWLEDGE OF GOD

As a Kulin Brahmin in the service of the Muslim rulers of Bengal, Ram Mohan Roy was well versed not only with the classical-cum-offical languages of his era, i.e., Persian, Sanskrit and Arabic, but also with the prevalent religious ideas of the time. As a teenager, he had already rebelled against the system of idolatry; and contact with Islamic thought fuelled his monotheistic fervour further.

His brush with Europeans of Bengal, including both Unitarians and Serampore missionaries, opened for him a new vista of religious experience and vocabulary. Like Mahatma Gandhi many decades later, who found succor in Sermon on the Mount, Raja Ram Mohan Roy was deeply impressed by the saying of Jesus in the New Testament. He wrote a tract called The Precepts of Jesus: A Guide to Peace and Happiness in 1820. In the preface he refers to the foundational nature of the teachings of Jesus  when he notes "that law which teaches that man should do unto others as he would wish to be done by, reconcile us to human nature, and render our existence agreeable to ourselves and profitable to the rest of mankind".  He further states that although this idea "is partially taught also in every system of religion with which I am acquainted," it "is principally inculcated by Christianity". The tract, the small booklet, then presents the compilation of Roy's selections from the sayings of Jesus, which he thinks are essential to mankind's happiness and peace.

However, a major controversy erupted after the publication of this tract. Joshua Marshman, one of the Baptist missionaries in Serampore castigated Roy for doing violence to the teachings by disengaging the words from the person. Roy had presented teachings as important and not the man who said them. In that he was influenced by European Unitarians who did not believe in the divinity of Christ.

A lot can be said about the Roy–Marshman controversy. The heart of the matter perhaps lay in Roy's contention that human reason, through careful observation can find, recognise and worship God, whereas Marshman contended that God's true self cannot be observed, it can only be revealed by God himself, which He, in fact, did in his Son.

Roy believed in his faculty of reasoning. Marshman proposed submitting to God's revelation.

The controversy is alive even today. In popular culture, it was  last seen in the Raj Kumar Hirani's Aamir Khan–starred 2014 film PK. The film does not deny the existence of God, but says that none of the religions can tell us anything about God. Religions themselves are corrupted. Using our reason, we need to find some universal principle or principles operating in all religions, and live by that code.

If religions are corrupted, what guarantees our reason’s escape from corruption.

Our present postmodern milieu has exposed the limits and corruption of reason. How should we recognise the truth then? How should we gain the true knowledge of God?

The Roy–Marshman debate is still relevant.

The Precepts of Jesus is an important book for the 21st-century Indians.

It is the birth centenary of Ram Manohar Lohia today. Not many newspapers, print or online, carry opinion pieces or reminiscences of the man. He himself apparently never celebrated his birthday citing the reason that it’s the day Bhagat Singh, Rajguru and Sukhdev were hanged by the British in 1931. He’s often  called  the most original democratic thinker of independent India but the silence about him in the mainstream academic and public sphere is almost deafening. The popular chronicles of modern India’s political history ignore him almost completely. India After Gandhi, the ‘magisterial’ tome by Ramachandra Guha, mentions him only in passing. Even though Guha’s book is not on Gandhian legacy, the title has an ironic ring to it because Lohia understood Gandhi more seriously than most Gandhians. In India After Independence by Bipin Chandra Pal and others, Lohia does claim a paragraph or so more, but even there he is chided for his anti-Congress and anti-Nehru sentiments, which, of course, were very strong. In books such as these, the authors apparently grudge his ‘goongi gudiya’ comment the most, and it seems that this alone disqualifies Lohia from any attempt towards a disinterested assessment. Lohia was not known for restraint when he targeted his political opponents and in any case he must not be wide off the mark when Indira Gandhi appeared on the political scene riding largely on her father’s wings. But there must be a very tender and honest aspect to his personality that even though his friends acknowledged him to be hot-headed, they did indeed respect him. Kishan Pattnayak in his book of collected essays Vikalpaheen Nahin Hai Duniya recognizes that it was betrayal of principles, Gandhian and others, that infuriated Lohia, but there were also times when he remembered his former colleagues, like Nehru, with particular fondness.
Personal issues aside, what makes Lohia a formidable thinker is the felicity with which he combined the spiritual and the social. He is able to raise questions of traditional oppression using traditional idiom. His insightful essays about Indian godhead, the conflict within Hindu society, the material tensions in Indian culture, and the challenges of technology must go down as essential texts for young Indian students. The impact of his ideas is felt four decades after his death and beyond ideological camps. Megnad Desai in his piece (Indian Express, March 7) that he wrote as an obituary to British labour politician Michael Foot, and in which Lohia is mentioned just as a footnote, could not but acknowledge Lohia’s contribution in making caste struggle an important ingredient of political movements. With electoral fortunes of Left parties plummeting, there is already a new openness for Lohia. This also points towards emergence of a reconfigured centrist position in Indian politics.
It can be expected that a renewed conversation between Gandhi, Ambedkar and Lohia will open up promising political horizons for India.

[Originally published under the same title in 2010 in Herald of India. Another blog post can be read here]
Posted by Ashish Alexander at 11:06 am No comments:


I don’t particularly follow the news of religious persecution in India. I am a teacher and not a social activist, nor a human rights crusader. But if you are on social media, you cannot avoid such news for too long. Just yesterday, March 15, 2020, I got to hear about four cases where communal groups assaulted Sunday prayer services—two in Uttar Pradesh and one each in Bihar and Goa. Last Sunday, (March 8, 2020) two other cases of communal assault in UP had come to light. Attacks on Sunday worship, especially, in mofussil towns and villages have become a weekly affair. Every Sunday afternoon you can be almost sure that a WhatsApp message to that effect is coming—and it does come.

A well-planned campaign is being run to harass Christian prayer groups and small independent churches across the country. Unfortunately, the communal groups are manipulating and pressurizing even the local police against the worshippers. 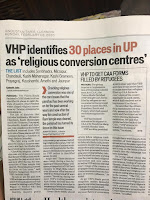 I wonder who these people are and what grouse they have against religious meetings.
The attacks are made not by local people. Locals have no problems with prayer meetings in their neighbourhood. Many of the assailants come from “outside”. This is something similar to what happens in cases of riots. In recent Delhi riots, it has been found that most of the goons came from neighbouring Haryana and Uttar Pradesh. So this allegation that conversions are opposed by local people is completely false. These attacks are engineered by communal organisations that often serve the interests of political parties.

The spiritual phenomenon of conversion is ... changed into a religio-cultural battle fought on a political turf.

Attacks on churches, as we know, are a result of deadly blend of religion and politics. Parties founded on religious nationalist ideology such as the BJP often attack the rival political parties for appeasing the minorities and indulging in “vote-bank” politics. To counter that, these parties have created a fear psychosis in the Hindu community that it is in danger and the only way to survive is to rally behind the politicians. The party and its affiliates continue to fan the communal fire by various means. Recently, an advocate in Delhi, a BJP leader, filed a public-interest litigation in the Delhi High Court to control religious conversion. On the grassroots, the party directs its cadres to attack the churches. This is done to keep the pot of communal polarization boiling. 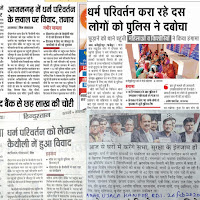 There is something deeper at work, too. Religious conversions upset the social structure, which, in India, is the outcome of the caste system. Numerically speaking, Indian population is largely composed of people from the so-called backward classes. Hence, conversion among them is far more visible, even though people from the upper castes are also converting. The slipping away of the “lower castes” from their grip is behind the rage of India’s upper castes. The spiritual phenomenon of conversion is thus changed into a religio-cultural battle fought on a political turf.

The false allegation that poor are forced to convert is absurd. As a matter of fact, force is being used to stop people from exercising their freedom of conscience, their right to convert. Week after week, force and intimidation is employed to put fear in people. Week after week, Christian pastors are being harassed and bullied. Week after week false cases are being filed against innocent people. This is what we must be challenged by every fair-minded Indian.
Posted by Ashish Alexander at 4:50 pm 2 comments: