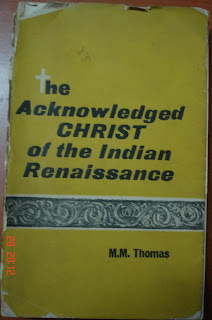 I had always wanted to read this book and this evening as I met a friend at his house and shared a bit about my trip to UTC, Bangalore, haunted by spectres of Bangalore theologians, I asked him if he had a copy of M. M. Thomas's The Acknowledged Christ of the Indian Renaissance. He immediately pulled out a copy. I was pleasantly surprised to see the original 1970 edition published by The Christian Literature Society, Madras. I expected some kind of photocopy, originals of such books being rather rare, more so in my city, which is very far from Bangalore, in terms of distance as well as in nurturing theological reflection (I, in fact, remember once glancing through a photocopy of this title long time back).
The blurb of the book reads as follows:

A good deal has been written in recent years on the 'hidden' or 'unknown' Christ of traditional Hinduism. Mr. M.M. Thomas deals here with 'acknowledged' Christ of renascent Hinduism which was integral to the total Indian awakening. He surveys how some of the great spiritual leaders of the Indian renascence—leaders like Raja Rammohan Roy, Swami Vivekananda and Mahatma Gandhi—sought to understand the meaning of Christ and Christianity for the new India that was emerging. And he studies, as part of his theological evaluation, the salient features of the dialogue that went on between these men and some of the Christian spokesmen in India.

In the preface, Thomas lays out his thoughts behind writing this book:

..I am deeply concerned with men's reflections on the truth of Jesus Christ in the context of their grappling with the meaning of life in concrete situations of history ... The theological fragments of this book relate to one historical situation, namely the awakening of Indian nationalism in the nineteenth and the early part of the twentieth century.

What I have done in this study is to survey how some of the foremost spiritual leaders of the Indian renaissance, especially of Neo-Hinduism, sought to understand the meaning of Jesus Christ and Christianity for religion and society in renascent India...As part of the survey, I have also tried to study how the Indian Church, in the thought of some of its theologically-minded representatives, has attempted to enter into dialogue with the ideas of these leaders and to formulate its own faith in Christ and the meaning of Indian nationalism.

This must be the most important book to be rediscovered by both Hindus and Christians of India, and of Karnatka in particular, a state that has witnessed some of the ugliest expressions of communal and cultural bigotry. I wish more people read and discussed this book and its author.
It's going to be a slow read. I am a slow reader. And given the battered condition the book is in (it's a 40-year-old paperback) it needs to be carefully handled. It needs to be carefully handled because it belongs to a friend and in a strange way the book belongs to the history of my city. It originally was part of Mr J. S. Dethe's library. On the full-title page there is rubber-stamp mark, upside down, that gives the particulars of its first owner, his name, designation, address and a three-digit phone number. Mr Dethe was one of the senior architects in the team that planned and developed the city of Chandigarh. I am intrigued to know that an architect was interested in matters theological. One wishes one could meet and talk to late Mr Dethe about his ideas about developing structures for human habitation and also his notions about developing a framework for biblical theology in India. Mr Dethe was also a member of a small group that got the church built in Sector 18. It would have been interesting to know what he felt about this book and how much did Thomas, who himself wasn't a trained theologian, influenced his efforts in community building. That church today is called Christ Church and is part of the Church of North India's (CNI) Diocese of Chandigarh. I have been told that Pratap SinghKairon, the then chief minister of Punjab, wanted only one church, one temple, one gurudwara and possibly one mosque in the newly built capital city of Chandigarh. For that reason Dethe and others had aimed to build this one church as an interdenominational/non-denominational church, where Christians from all doctrinal backgrounds may come and worship. Ravi Kalia, the author of Chandigarh: The Making of an Indian City, mentions the fact that Maxwell Fry had a 'Quaker background' and Le Corbusier had a 'Calvinistic upbringing' and these affected the work of these two architects of Chandigarh। In this context too, it would too be interesting to know Dethe's church background.
(I am grateful to the publishers of The Herald of India for accommodating this write-up on their news portal. The editor's little note adds a great value to it. I am humbled)
Posted by Ashish at 8:36 pm 4 comments: 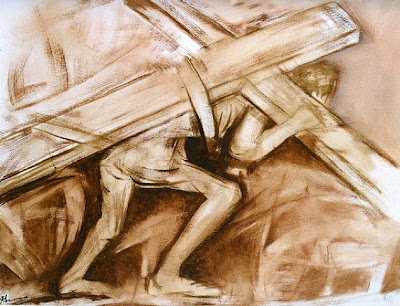 (I found this IANS piece on the Yahoo! Web site this morning. There are not so many stories out there on Indian painters and on modern Indian art in general. So wanted to save this one here. By the way, that he is a Punjabi and painted Jesus is not incidental to this act of preservation. The original story is found at http://in.news.yahoo.com/43/20100111/812/tnl-i-ve-gone-back-to-childhood-in-lahor.html. The image above is a painting by Khanna titled "Christ Carrying His Cross" found at www.artnet.com)

I've gone back to childhood in Lahore: Artist Krishen Khanna

Mon, Jan 11 08:45 AM
New Delhi, Jan 11 (IANS) In his new series of works, leading Indian contemporary artist Krishen Khanna has travelled back in time to his days in pre-partition Lahore, which today lies in Pakistan.

'They are mostly a recollection of events that I have seen in my early childhood - when tension between the British rulers and Indian freedom fighters was escalating,' Delhi-based Khanna told IANS in an interview.

The 84-year-old artist is preparing for a retrospective exhibition at the Lalit Kala Akademi Jan 23 to be organised by the Mumbai-based online gallery Saffronart.

Khanna has completed five large format oil compositions in monochrome, which he says are an extension of his memories of Maclagan Road in Lahore, where he lived in a cosmopolitan neighbourhood 'with Parsis, Sikhs, Christians and Muslims'.

'The series begins with an oil drawing of Gurbaksh Rai, an old homeopathic doctor saying goodbye to his family after being arrested by police. He was an ardent Congressman. I have used monochrome because if there is something I want to say, it is best to avoid the dynamics of colour. Then you are not dealing with the man - the subject matter - any more,' Khanna said.
The artist then moves on to terrorists 'trying to find a target in the way Bhagat Singh scouted for one' and also 'reminisces about an English lady who taught his mother how to read and speak the language'.

'One of my canvases depicts my uncle going to Pakpattan, a neighbouring town, with his family. He is stopped by the police, who threaten to shoot him. Fortunately, they don't.

'Another composition is about the ethnic cleansing that took place soon after partition where a woman finds herself at the bottom of a horse cart during the ethnic cleansing and a former Parsi armyman turned dentist in Lahore,' the artist said, describing his new body of works.

The retrospective spans six of Khanna's works from 1943.

'One had to be choosy about the art works, but several of my compositions - especially the black and white series - are abroad in the US and Europe. There are a lot of holes in the chronology,' Khanna said.

Walking down memory lane, the artist said he enjoyed working on his black and white series of ink sketches that he started on while in Honolulu.

'I worked in a bath tub because I feared messing up the room. Most of them were shapes that I saw at the bottom of the tub. I used to pour water through the sides of the papers in rivulets to smudge the colours on the surface for a blurred look. It was a convenient method. I took most of my black-and-white works for an exhibition at the Museum of Modern Art in New York and at the Charles Egan Gallery,' Khanna recalled.

'You can see five of them at the National Gallery of Modern Art in the capital, which is also planning another retrospective,' the artist said.

Khanna lamented that 'his friend Tyeb Mehta, who grew up with him Lahore, could not manage a retrospective'.

Born in 1925 at Faislabad in Pakistan, Khanna grew up in Lahore. He studied art after graduating from the Mayo School of Fine Arts. In 1947, his family moved to Shimla after partition. It found a way into his early works.

Most of Khanna's works are figurative. 'I used to do abstractions earlier, but now I have moved to human forms,' he said.

Khanna has always 'loved connecting to the masses through his art'.

'In the 1970s and the 80s, I painted a series of trucks ferrying workers - and coloured them with the shades of people and goods the vehicles were carrying. They were mostly monochromatic pictures,' he said.

Around the same time, the artist started working on Christ as a subject. 'I was looking at Jesus Christ as a holy and otherworldly person striving and going through existence. He was a carpenter's son and the state rose against him,' Khanna said.

'If you look at my series on the Bandwallahs - whom I remember from my days in Lahore where the sahibs and the memsahibs used to listen to them - there is something sad about those people despite the colourful compostions. I have always tried to capture human emotions in my compositions - not make life studies,' Khanna said.

The artist, who has exhibited all over the world in his career spanning more than six decades, has been bestowed several honours, including the Lalit Kala Ratna from the president of India in 2004 and the Padma Shri in 1990.