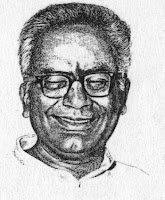 One of my colleagues had his birthday on 23 March. I walked up to him as soon as he came in and wished him a Happy Birthday. As I shook his hand, I said to him, 'Do you know you share your birthday with...' Before I could finish, he quipped, 'Yes, the martyrdom of Baghat Singh and ...' 'No, no, I am talking about Ram Manohar Lohia.' And as I said this, another colleague, who loves a friendly bantering said, 'No wonder, there is something of Amar Singh in the birthday boy..." And we had a a little laugh about it.

This two-minute episode is quite instructive of our political sensibilities at this point of time. Politics for us is either a dead ideal or a living, though sick, cunning. In the middle of these two perceptions, the insights are lost. In contemporary Punjabi folklore Bhagat Singh is an icon of Sikh and not just Marxist pride. There are movies about Bhagat Singh, one of them has 23 March 1931 as part of the title. This has kept his memory alive. The other figure, that of Amar Singh, is as theatrical as any Bollywood film. He epitomises, in public eye, political opportunism at its worst and to the critics, this is what ultimately happens to the political heirs of Lohiaism.

But I want to know the man first hand. I have recently been reading about Ram Manohar Lohia. The trouble is that his books are just not available out there. So I've taken printouts of his few writings, which are scattered on various blogs, and read them off and on. On the 23rd, it was his birth centenary. It is generally a big deal when a political leader of such stature complete 100 years. But apart from one article in Deccan Herald and a report of a seminar in Goa there wasn't much that was available to me online on that day. I picked up a copy of the Hindu to see if there's any editorial or op-ed. Zilch.

I am not a socialist. But to me it was a bit sad to see this amnesia about an important person in our recent history. So I wrote a quick piece for the Herald of India, which the editor was very kind to publish and give a headline too.

One reader responded to the write-up with a very interesting anecdote.

The timely and informative piece, 'Deafening silence on Lohia', took me back to mid- sixties when I heard Lohia for the first time at an open rally in Chandigarh's Sector 15. It still is etched on my mind how he attributed most of our failures to our inherent indecisiveness. I remember even the fine example he gave to prove his point. On visiting a friend, if he offers us a choice between having tea and coffee we fail even to tell him our personal preference or choice. "Kuch bhi chaleyga", Lohia rightly lamented the attitude. He continued by lampooning Lal Bhadur Shastri, the then PM, saying that he too remains indecisive on many issues and he often sees two instead of one face of Shastri in Parliament, yeh bhi theek hai, woh bhi theek hai. -Balvinder

I love such personal memories and anecdotes but this was a particularly intriguing comment because I lived in Sector 15 of Chandigarh for most part of my life. That little connection warmed me up.

Later that day, I got to read the news that Kanu Sanyal committed suicide by hanging himself. Did somebody notice that he chose 23 March as the day of his death? And also, that three other revolutionaries died that way in 1931. Here are a few of links of some remembrances. Rediff, Times of India, DNA, The Hindu.

Dear Ashish
That is what makes you lovable. It was truly a reminder of the offtrack that we are. 'Delete history' is a typical psychology of current form of intelligentsia. Of course, we are uncomfortable part of that. There are some people like Gopinath kaviraj, Ramchandra Gandhi, Vaagish Shukla,Muktibodh etc about whom I think we should revisit our recycle bin. You may have your own list too. What an irony that hope is in the bin.

Oh Sunil! Your comment really overwhelms me! Thanks for mentioning the other names. So much to learn from a senior like you. Yes, we need to soil our hands. I will write more on your blog/e-mail!

By writing this you have done something which many have not done...obviously...It is strange...as Lohia's so-called followers like Nitish or laoo, or Mulayam or many-like, are important and powerful people today..May be it happens during the course of year...May be Hindi journalism in Hindi heartland carried it, which is not in much part online...
Lohia's academic relevance is also important, as to my little knowledge, he was the one who had sown the seeds for Mandal politics... how do you like the idea of starting a Rammanohar Lohia blog for the year...